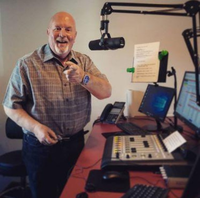 Michael "Mike" Dean Neff of Troy, PA passed away due to complications from Covid-19 on December 31, 2020. Mike was born on October 6, 1952 in Lock Haven, PA to H. Dean Neff and Winifred Swoyer Neff. His family later moved to Mansfield, PA and he graduated from Mansfield High School in 1970. Mike graduated from Ohio University in 1974 with a degree in radio and television sciences. Mike's passion for radio began in high school and fueled a long and prestigious career in broadcasting. His colleagues (some of whom know him as "Super Splice" or the "Sultan of Splice") fondly recall his dedication and expertise, and listeners remember his warm and amiable on-air presence, at stations WNTE of Mansfield, PA, KDKA of Pittsburgh, WIND of Chicago, WGY and WGFM of Albany, NY, WRAL of Raleigh, NC, WMAL of Washington, DC, WARM of Scranton, PA, WHP of Harrisburg, PA, WPTF of Raleigh, NC, WQFM, WQFN, WEJL, and WBAX all of Scranton, PA, and WOGA and WNBT of Mansfield, PA. He also worked for United Way of Lackawanna and Wayne Counties and the Lupus Foundation of Pennsylvania, Pocono/Northeast Branch. Mike will be remembered for his compassion, generosity, mentorship, and gleeful sense of humor. Mike was preceded in death by his parents as well as his step-mother, Marjorie Montovino Neff. He is survived by his daughter and son-in-law, Elizabeth Neff and Paul Sotoudeh of Washington, DC; his son and daughter-in-law, Kyle Neff and Kara Constantine, and grandson Ewan Neff, of Germantown, MD; his partner Connie Judson Myal and her son Nate, her daughter-in-law Angie, and their children Wyatt, Abby, and Anika of Troy, PA; his Aunt Sarah and Uncle Paul Neff; Uncle Dick Klostermeyer; and his many Neff cousins. He maintained close friendships with many of his Lincoln Elementary School in Lock Haven classmates as well as his Mansfield High School classmates, and often coordinated annual reunions and activities. He was so loved and will be deeply missed by all. Arrangements for a Celebration of Life are tentatively planned for October 2021. In lieu of flowers, memorial donations may be made to two organizations Mike ardently supported. Mike loved animals and he championed the work of Second Chance Animal Sanctuary of Tioga, PA (www.secondchanceas.org). He also supported the fundraising efforts of his son, Kyle, for the American Foundation for Suicide Prevention (https://afsp.donordrive.com/participant/MichaelNeffTribute). Buckheit Funeral Chapel and Crematory, Inc. 637 S. Main St. Mansfield, PA is assisting the family.