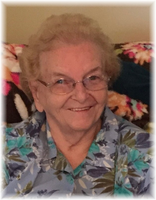 Emma Young Jaynes, passed away on Monday, April 12, 2021. Emma was born in Bingham Switch (Potter County), Pennsylvania on June 19, 1932 to Charles and Hazel Abbey Young. She graduated from the Ulysses (PA) High School in 1950 and the Arnot Ogden School of Nursing (Elmira, NY) in 1954 with an RN degree. She married William Jaynes on September 12, 1954 in Bingham Center, PA. Together they had three children: Charles, Colby and Carol. Emma worked as a nurse at Corning (NY) and Wellsboro (PA) hospitals, as well as Broad Acres and the Green Home Nursing Homes (Wellsboro, PA). She graduated from Mansfield State College (PA) in May, 1970 with a B.S. Degree in Education. Emma married Alan Cole in April, 1981. In December 1981, she moved to Dade City, FL where she worked at the East Pasco Medical Center hospital, as well as the Geriatric Center and the Pasco Nursing Home where she was the Director of Nursing. She and her husband, Alan Cole built and managed Seven Acres and Sunburst RV Parks in Dade City, FL. In July 2007, she married Homer Smith. Emma is preceded in death by her parents; a sister, Etta Chambers of Wellsville, NY; a brother, George Young of Genesee, PA; and three husbands: William Jaynes of Lawrenceville, PA; Alan Cole of Calhoun, GA; and Homer Smith of Dade City, FL. She leaves behind: Charles (Kathy) of Lawrenceville, PA, Colby (Suzanne) of Moravian Falls, N.C., and Carol (Joey Byrd) of St. Petersburg, FL; six grandchildren; and six great grandchildren. Emma will be remembered by all who knew her for her patient, loving, tolerant spirit, her love for God, and her gift of healing. Friends and family are invited to call on Saturday, April 17, 2021 from 3-4pm at Buckheit Funeral Chapel and Crematory, Inc. 637 S. Main St. Mansfield, PA. A funeral service will follow immediately at 4pm with Rev. Dr. Carol Byrd and CH COL Joey T. Byrd officiating. Burial will take place in East Lawrence Cemetery in Lawrenceville, PA. Memorials may be made to Thornwell Home for Children, 302 S. Broad Street, Clinton, S.C. 29325-9972.