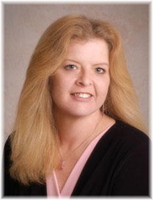 Tammi Lynne Ferguson, age 54, of Wellsboro, PA, passed away on Friday, April 23, 2021 at her home. She was born on May 18, 1966 in Akron, OH, a daughter of Martin Clark and Judith "Judy" (Sisler) Haas. Tammi was passionate about working with with people throughout her life. She loved motorcycling with friends and listening to live music. She had a talent for gardening and filled every flowerbed with as many flowers and as much love as possible. Tammi was fiercely loving mother but the title she wore most proudly was, Grandma. Tammi is survived by her father, Martin Clark of Atwater, OH; her mother, Judith "Judy" Haas of Galeton, PA; her former husband, Randy Ferguson of Galeton, PA; a daughter, Amanda (Sean Mizell) Golec of Cantonment, FL; a stepson, Craig Ferguson of Galeton, PA; and 5 grandchildren, Tyler Ferguson, Erika Ferguson, Aiden Hurd, Zayne Mizell, and Jozlynne Mizell; a sister, Traci (Craig) Lindesmith of Austin, TX; and her nephews Clark Lindesmith and Carson Lindesmith. She is also survived by her partner of 2 years, Don Geneski of Wellsboro, PA. A memorial service will be held on Friday, April 30, 2021 at 2:00 PM, at West Pike Baptist Church 517 Old Route 6 Galeton, PA 16922 with Reverend John Prouty officiating. In lieu of sending flowers, the family has requested that donations be made to the Potter County Women's Recovery Center. Buckheit Funeral Chapel and Crematory, Inc. 637 S. Main St. Mansfield, PA is assisting the family.