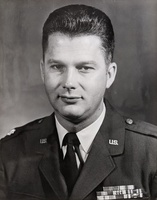 Gustave Wadsworth Kilkenny, age 85, of Mainesburg, PA passed away at his home on Monday, September 6, 2021. He was the husband of the late Mary Jane (Coolidge) Kilkenny who died in 2016. Born on November 3, 1935, Gustave graduated from Brown University and served as an officer in the US Air Force in the Vietnam War and at the Pentagon before retiring after 20 years of service, attaining the rank of major, and receiving a Bronze Star and Meritorious Services Medal. Subsequently he worked for the US Postal Service, studied history at Mansfield University, and was a frequent substitute teacher in Mansfield and surrounding schools for many years. He was the brother of an Episcopal minister, son of a church organist, and member of St. James Episcopal Church in Mansfield. He enjoyed hunting, fishing, and the company of his dogs and cats. Gustave is survived by his son, Christopher (Diana Lyn Cote) Kilkenny of East Hartford, CT; daughter, Susan Hunt of Ashland, KY; stepdaughters Penny (Donald) Parker and Pamela (Marc) Reese; and stepsons Joel (Tina) Coolidge and Jason Coolidge of Wellsboro, PA. He was preceded in death by his parents William and Alice (Carlson) Kilkenny, his wife Mary, brother Rev. Strathmore Kilkenny, and stepson John Coolidge. A memorial service will be held at All Saints' Episcopal Church, 3714 Fox Hill Rd, Ulysses, PA on Thursday, September 16 at 2pm with Rev. Janis Yskamp officiating. Flowers may be sent to the church and donations may be made in Gustave's memory to Animal Care Sanctuary of Wellsboro and East Smithfield. www.animalcaresanctuary.org Buckheit Funeral Chapel and Crematory, Inc., 637 S. Main St., Mansfield, PA is assisting the family. www.buckheitfcandcrematory.com