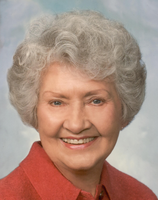 Jeanne Elizabeth (Ayers) Wilber passed on to her heavenly home on July 22, 2022. She died peacefully with family members at her side. Daughter of James Edgar and Catherine Lotta (Craw) Ayers, Jeanne was born on April 15, 1929, in Elmira, New York. The Ayers family moved to Daggett, Tioga County, Pennsylvania in 1942. At Troy High School she met Gene Wilber, who would later court her and become the love of her life. Jeanne graduated from Mansfield University in 1951 and taught music in Addison (New York) schools. Jeanne and Gene were married on December 27, 1952, while he was on leave from the Navy between combat deployments to Korea as a carrier-based naval aviator. Over the next decade they had four children: Bruce, Thomas, Mark, and Susan. Jeanne and Gene were a devoted couple who shared an abiding love and a deep Christian faith that they relied on to face life's challenges, including their nearly five years of separation while Gene was detained in the prisons of Hanoi, North Vietnam. On his joyful return in 1973 they would not spend time apart during their remaining 42 years together until Gene's death on July 8, 2015. Among her many family, community and church activities, Jeanne found satisfaction in developing one her many craft interests – quilting – into a store that drew quilt hobbyists from around the country and internationally. She and Gene retired the business in 1996, devoting their remaining years together to loved ones, church, choir, gardening, music lessons, homesteading, smiling, helping others, and giving thanks daily. After Gene's death, Jeanne remained actively engaged with friends and family, many of whom relied on her kind spirit and wise, gentle counsel. In addition to her husband of 62 years, Gene (Walter Eugene) Wilber, she was preceded in death by her parents, Ed Ayers (1968) and Catherine Ayers (1994), and her younger brother, James (Jim) Edgar Ayers, Jr. (1964). Jeanne is survived by her children, Bruce, Thomas (Linda), Mark (Rebecca), and Susan Efthimiou (Marcus), twenty grandchildren, twenty-two great grandchildren, and two great, great grandchildren. The family will always remember her for her guidance, her devotion and leadership through any challenge, her strength of conviction, and her lovingkindness. It is more blessed to give than receive. Without question Jeanne is among the blessed. Friends and family are invited to call on Wednesday, July 27, 2022, from 12 to 2 PM at Buckheit Funeral Chapel and Crematory Inc., 637 S. Main St. Mansfield, PA. A funeral service will be held immediately following the viewing at 2 PM at the Buckheit Funeral Chapel and Crematory Inc. with Reverend Bill Pipp of Carlisle, PA officiating. Burial will take place at Jobs Corners Cemetery. www.buckheitfcandcrematory.com