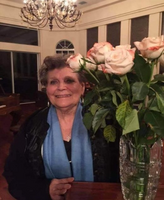 Carolyn Lucy Folcarelli, 90, of Mansfield, PA, died Thursday, January 19, 2023 at Guthrie Robert Packer Hospital in Sayre, PA. Carolyn was born in Telford, PA, on September 22, 1932, the oldest daughter of six children of Howard and Lottie Mae Linder. She attended Souderton High School, where all of her children went years later and had some of the same teachers. Carolyn was the wife of the late Anthony J. Folcarelli Sr., who died in 2009. They had been married for 55 years. Carolyn and Anthony lived on their farm in Telford for over 40 years. They raised their six children there and later retired to their mountain home in Mansfield in the mid-1990s. While in Telford, they had a sustainable farm with many animals, including horses, ponies, steer, pigs, sheep, and chickens. Carolyn had a weekly egg delivery route, and she also regularly preserved all of the produce from their huge vegetable gardens. She was employed by the U.S. Postal Service as a rural mail deliverer until she retired. During her years in Telford, she was a member of St. Marie Goretti Parish in Hatfield, PA, where all of her children attended school. She loved cooking, baking, sewing, crocheting, and upholstery, and gifted many of her beautiful works to her children, grandchildren, family, and friends. After retiring to Mansfield, Carolyn was an active member of her community. She belonged to Holy Child Catholic Church in Mansfield and was a member of the Ladies Guild, as well as a member of Good Neighbors of Mansfield. She also participated in Women in the Wilds and Women on Target events with her granddaughter Morgan. She enjoyed attending Endless Mountain Music Festival in Tioga County every year. Carolyn was most known and loved for her coffee and baked goods at Ten West Espresso Co., the coffee shop on Main Street in Mansfield which she owned and operated for 22 years after it was originally opened by her son and daughter-in-law at a different location in 1996. Carolyn's Ten West was a special place, frequented by local people and out-of-towners. University professors often held their independent study groups there; photographers and artists exhibited their works on the brick walls; and over the years, musicians, poets, writers, and comedians performed on designated weekends. Carolyn worked in her coffee shop six days a week until she was 88 years old, when she had a stroke at the end of October 2020. She recovered and, after rehabilitation, was home by Christmas. Carolyn remained in her family home after her stroke and was still able to get around right up until she got sick in mid-December 2022. She was always lovingly cared for by her son Anthony Folcarelli Jr. and his wife, Cate, as well as her daughter Maria, who came up frequently in between her work shifts. Carolyn will be forever remembered as the most beautiful woman, both inside and out, with stunning blue eyes, a heart of gold, and the love of everyone she met. To know her was truly to love her, and she was loved greatly by all of her family and her many friends. Her home was always open for Sunday dinners, where she sat at the head of the table and shared her love with everyone who showed up from near and far. In addition to her parents, Carolyn was preceded in death by her youngest daughter, Dolores, and her husband, Anthony Sr. She is survived by her three daughters and two sons, 11 grandchildren, and nine great-grandchildren: Debbie Palombo, husband Larry, and sons Matthew (wife Dana and their son Lucas) and Nathaniel, all of Tampa, FL; Anthony J. Folcarelli Jr. and wife Cathy "Cate" of Mansfield, PA, and their daughters Morgan Flanagan-Folcarelli (wife Sara Misgen) of New Haven, CT, and Nicole Fasse of Danville, PA; Carol Ann Haber and husband James of Perkiomenville, PA, and their sons Jared of Alburtis, PA, and Travis of Fleetwood, PA; Joseph Folcarelli and wife Lori of Mansfield, PA, and their daughter Randi Lea Flexer (husband Jason and their daughters Julianna and Allison) of Zionsville, PA, daughter Amy (husband Ryan Welch and their children Sophia and Conor) of Cape Coral, FL, and son Joseph Folcarelli (fiancée Elizabeth Herndon) of Blossburg, PA; Maria Carreras of Birdsboro, PA, and son Moises (wife Sonia and their daughter Makenna) of East Greenville, PA, and daughter Regina Perry (husband Vince and their children Mason, Olivia, and Reese) of Valrico, FL. Carolyn is also survived by her siblings, Lois Royer (husband Don), Mary Yerk (husband Lamar), Florence Lynch (husband Jack), Lollie Snyder (husband James), and Howard Linder Jr., as well as her husband's brother Richard Folcarelli, two sisters-in-law Carol Field Folcarelli and Sandi Folcarelli, and many, many nieces, nephews, great-nieces, and great-nephews. In lieu of flowers, donations may be made in her honor to Holy Child Ladies Guild, 237 South Main Street, Mansfield, PA, 16933. The memorial mass will be held on Friday, February 10, 2023, at 11:00 am at Holy Child Catholic Church, 242 South Main Street, Mansfield, PA, 16933. A visitation and luncheon will be held immediately following the mass in the church hall. All are welcome. Buckheit Funeral Chapel and Crematory, Inc. 637 S. Main St. Mansfield, PA is assisting the family.