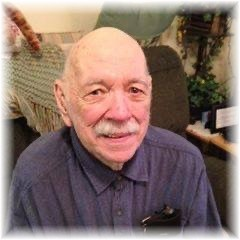 Edwin Vetter, age 93, of Wellsboro, PA passed away at his home on Wednesday, January 22, 2020. He was born on November 3, 1926 in Bristol, PA, a son of Carl and Vina (Selleck) Vetter. Edwin was the husband of Frances (Mattison) Vetter. He was a veteran of the US Navy having served during WWII, a member of St. Paul's Episcopal Church in Wellsboro where he played music with Father Hinton for 20 years, a member of the Loyal Order of the Moose, the Wellsboro Social Club, the American Legion, and attended Marsh Creek Fellowship Church. He and his wife enjoyed playing music with the Gaines Kitchen Band at personal care and nursing homes. Edwin was known by everyone as a jokester. Edwin is survived by his wife Frances; son Michael (Bonita) Vetter of Kentucky; son Mark (Dawn) Vetter of Arnot, PA; stepson Timothy Jay (Connie) Short of Westerly, RI; stepson Todd Jeffrey (Melissa) Short of Montgomery, PA; daughter Karen (Sam) Cooke of Mansfield, PA; daughter Lori Tice of Troy, PA; brother Carl (Evelyn) Vetter, Jr. of Tennessee; sister Mary Smith of North Carolina; 12 grandchildren, 10 step grandchildren, many great grandchildren and great great grandchildren. He was preceded in death by his first wife of 60 years, Edith Vetter. A memorial service will be held at 11:00 A.M. on Monday, January 27 at the Marsh Creek Baptist Church with Pastor Keith Williams officiating. A private inurnment will take place at St. Paul's Episcopal Church at a later date with The Reverend Janis Yskamp. Services are under the direction of Buckheit Funeral Chapel and Crematory, 637 S. Main St., Mansfield, PA.

Share Your Memory of
Edwin
Upload Your Memory View All Memories
Be the first to upload a memory!