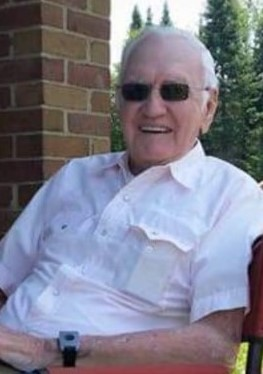 Obituary of Donald A. Fish

Donald A, Fish, (97), of Wellsboro, Pa, passed away on November 18, 2022. Donald, fondly known as Don, was born in Mansfield, Pa. to Luther and Nettie Fish on July 8, 1925, one of 6 children, all of whom have predeceased him. Don was also predeceased by his loving wife of 68 years, Martha B. Fish in 2014, and their son Ronald in 2019. He is survived by his 3 children - Donette Dunfee of Richmond, Va., Sylvia Signor of Wellsboro, Pa, and John Fish (Elaine) of St. Albans, Vt. He has thirteen grandchildren, sixteen great grandchildren, three great great grandchildren, a brother-in-law, and several nieces and nephews. Don was a loving husband, father, grandfather, and had many friends. Donald was known as a kind and strong man, and a hard worker. He held many titles during his life. He, at the young age of 26, purchased a 300 acre dairy farm in the community of Welsh Settlement, near Wellsboro, Pa. Here, he and his wife raised their 4 children. He also was a truck driver and hauled pipe for Armco Steel out of Mansfield, Pa. for many years. Don's other entrepreneurial undertakings included: builder of a jug milk and restaurant known as Dairyland Farms in Mansfield, Pa., co-owner with his lifelong friend, Theodore Compton, a heavy equipment business and operator, and a land developer. In his spare time, Don was an avid deer Hunter on his own land, and traveled across country with friends every year for 22 years to hunt elk in Montana and Colorado. A heartfelt thank you to those who helped care for Don in his home in recent years, as well as a special thank you to all of the nurses and doctors at UPMC Wellsboro for their wonderful care and support in his final days. Also, the family would like to extend their sincerest gratitude to Buckheit Funeral Home and Crematory, Inc. for being very accommodating and understanding during this difficult time. Donald will be laid to rest on Wednesday, November 23 at 10:00 am at the Welsh Settlement Cemetery on Arnot Road. In lieu of flowers, please donate to a charity of your choosing.