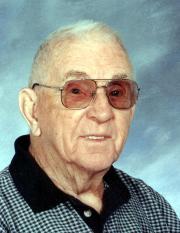 Type Obit Here Donald Edward Lovejoy, age 91, of Corning, NY, died on Friday, December 15, 2006 in the Corning Hospital. Donald was born on March 2, 1915 in Elmira, NY, a son of Frank and Fannie (Kniffen) Lovejoy. Donald was formerly employed with Corning Incorporated as a security guard and was very proud to receive his 50 year service pin for active and retired service. In retirement Don also worked at the Corning Building Company. He was a member of the All Saints Parish Community and Corning Incorporated Security Guards Retirement Group. His favorite pastimes were playing golf, horseshoes, bowling, walking, watching the Boston Red Sox, New York Giants and spending time with his family and friends. In his earlier years he had a band called the Blue Ridge Mountaineers where he enjoyed playing the drums. He continued for many years to enjoy listening to his own recorded band music. Don had cherished memories of working with his brother Harold at his business on Market Street, Deluxe Ice Cream. His favorite snack was always ice-cream. He viewed life from a lighter side and will be sorely missed for his quick witted sense of humor and wonderful whistle. Those that loved and knew Don will miss him greatly. Donald is survived by five daughters and sons-in-law; Carole Beck, Sheila and Charles Kiegler of Corning, NY, Mary Kay and Daniel Smyers of Lindley, NY, Donna Brown of Painted Post, NY, Karen and Thomas Metarko of Corning, NY; one son, Thomas Lovejoy (Lynn Pesesky) of Corning, NY, 10 grandchildren, 7 great grandchildren and sister Fannie Kelly of Elmira. Donald was predeceased by his sisters, Alta Patrick, Gertrude McIntosh, two brothers Harold, Charles and Harry Lovejoy and a son, Clifford Daniel Lovejoy. Family and friends are invited to call on Tuesday, December 19th from 9:00 a.m. to 11:00 a.m. at The Phillips Funeral Home, Inc., 17 W. Pulteney Street, Corning, NY. A funeral service will be held immediately following the visitation at the funeral home. Burial will be in Coopers Plains Cemetery in Coopers Plains, NY. Memorial contributions may be made in Donalds name to the charity of ones choice. Funeral services are under the direction of the Jacquelyn A. Buckheit Funeral Chapel, Crematory & Monuments, P.C., 637 South Main Street, Mansfield, PA. www.buckheitfcandcrematory.com

Share Your Memory of
Donald
Upload Your Memory View All Memories
Be the first to upload a memory!