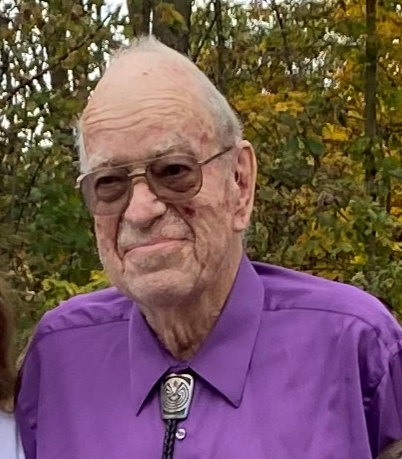 Richard W. "Dick" Kinnan, age 93, of Middlebury Center, PA passed away at his home on Sunday, March 27, 2022. He was born on November 10, 1928, in Elmira, NY, a son of Ivan and Jessie (Warner) Kinnan. Dick grew up on the family farm on Cummings Creek Road, Middlebury Center, PA. He attended Mansfield State Teachers College and transferred to Pennsylvania State College where he received a degree in Agriculture Education. Dick was hired as a Veterans Outreach counselor to farming veterans. He also taught Agriculture class and was the FFA advisor at Elkland High School. Dick also became the evening admissions counselor at Elmira College, then the vocational counselor at Corning Community College. In 1971, he took the position of Junior High School counselor at Williamson High School, then returned as counselor to Elkland High School and retired from there. Retirement saw Dick spending winters in Apache Junction, AZ, where he participated in many interest groups and clubs at Golden Vista RV Resort. He was a founding member of the amateur radio operators club, and was involved in the computer club, lapidary club, silversmithing and remote-control airplanes. The Kinnan family of seven camped across the United States including a trip to California. Dick traveled to all 50 of the United States as well as visited several countries abroad, including Japan and Europe. He and his wife were members of the Civil Air Patrol, Senior Extension and Family Motor Coach Association, and were the owner/operators of Kinnan Century Trees farm. Dick was a member of the Potter-Tioga Maple Producers Association, the International Maple Syrup Institute, TAG GROW, and was a lay leader at Tioga Methodist Church and Tioga Presbyterian Church. Dick is survived by a son Scott (Wendy) Kinnan of Souderton, PA and their children Michael Kinnan, Katie (Patrick) Conner, Jason Bergey, and Candice (Ronald) Thomas; three daughters Mary Gay (Michael) Deats of Middlebury Center, PA and their children Tanya (Andy)Harmon, Christopher (Jannice) Deats, Mary Janae (Justin)Grubb and Kayla (David)Lyon; Susan (Thomas) Reinsel of York, PA and their children Joseph(Torie) Reinsel, Sean Reinsel, TJ(Christina) Reinsel and Alyss(Brendon) McGirr. Sharon (Irene Rathke) Kinnan of Owego, NY; a son in law, John Fazzari of Aurora, IL, and children Andrew (Jenna) Fazzari and Mark Fazzari; and 18 great grandchildren. He was preceded in death by his wife, Barbara; his parents; brothers, Edward and Phillip; a daughter, Lee Fazzari; step grandson Jarrett Bergy. A private memorial service will be held at the convenience of the family. Donations may be made to the Tioga County FFA Alumni, PO Box 4, Middlebury Center, PA 16935 or the WAHS Skills USA Program, 225 Nichols St., Wellsboro, PA 16901. Buckheit Funeral Chapel and Crematory, Inc., 637 S. Main St., Mansfield, PA is assisting the family. www.buckheitfcandcrematory.com